IF YOU MISSED LIGHTFOOT IN SONG AT THE GLADSTONE, CATCH IT AT THE BLACK SHEEP INN, 5PM NOVEMBER 10. Tickets are available through Théâtre Wakefield. 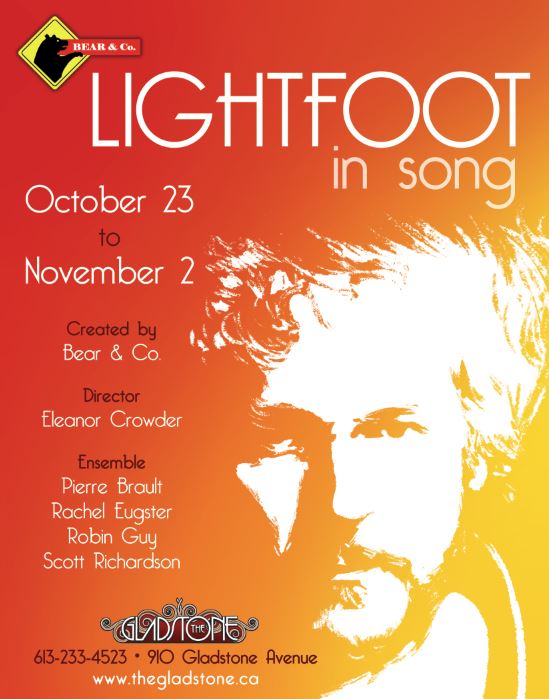 Bear pours a heady cocktail of your favourite Lightfoot, reuniting Pierre Brault, Rachel Eugster, Robin Guy, and Scott Richardson (directed by Eleanor Crowder) for an evening of nostalgia and surprise. Troubador and master storyteller, Gordon Lightfoot sings of our landscape and our history, instilling a national songscape into every Canadian’s heart.
Lift your glasses to honour another Canadian giant with the team that brought you tributes to Leonard Cohen and Joni Mitchell. We don’t know how it could be anything but . . . Beautiful.
Lightfoot’s “songs . . . have been embedded in the North American listening
consciousness for the past half-century and counting.”  —Mike Mettler
“Once you hear his songs, you never forget him.”  —Maxine Nelson
Once again this year, Bear invites local choirs to get involved, offering their members a discount on tickets, and asking them to rise in their seats to sing along in a couple of the songs. And once again, we hope that the audience is inspired to join in! (Email [email protected] for details.)
Help us celebrate the Canadian icon of whose songs Bob Dylan once said, “Every time I hear a song of his, it’s like I wish it would last forever.” 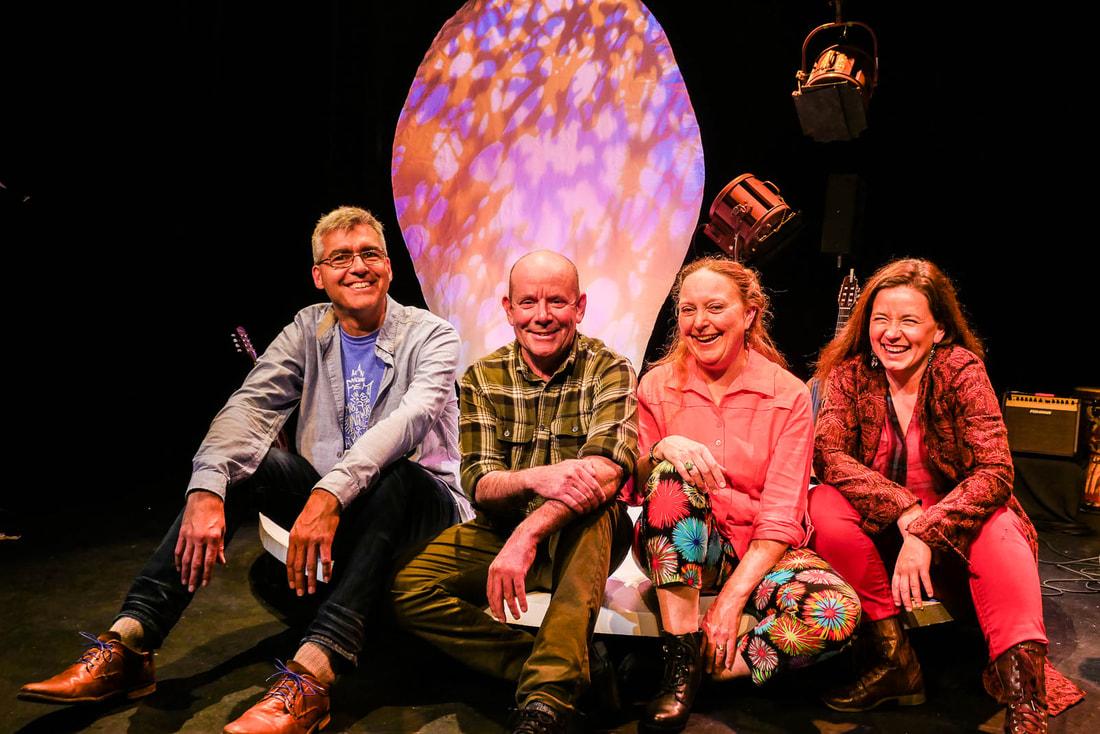 I had the pleasure attending the preview night of the musical tribute, “Lightfoot in Song,” presented by Bear & Co. at The Gladstone Theatre. I wasn’t sure what to expect going in, but was delighted by what ended up being an informal, often humorous, and beautiful homage to Canadian icon Gordon Lightfoot.

The structure of this show is simple. The set remains unchanged. It is simply instruments set up on the stage, and each of the four musicians pick from them prior to each song. The songs are interwoven with snippets of Canadian and American history, stories about Lightfoot, and personal experiences from their own lives. I loved that it wasn’t simply a concert, but an experience. And a highly enjoyable one, at that.

I should note here that I am a Gordon Lightfoot fan, so really, any show that features his music will be enjoyable to me. I am sure that is part of why I loved it so much. But moreso, I think that it was the informal ambiance, the feeling of just sitting around with a group of friends, trading stories and jokes, and enjoying good music that really made this experience so amazing for me.

And now….on to the musicians! Pierre Brault set the tone for the whole show with his solo as the first number. Pierre is no stranger to the stage, having amassed a great deal of performance experience around the world as an actor, a stand-up comedian, a playwright and teacher. Pierre is a talented performer and made this show quite enjoyable with his comedic embellishments and musical abilities. His voice has a beautiful tone, which was not unlike Lightfoot’s.

Rachel Eugster was, in my opinion the strongest singer of the foursome. Her voice was stunning, crystal clear, with a folksy quality that I could listen to all day; it was almost as though she was performing in a league of her own. She could have her own show, in my opinion, and would fill the seats. It didn’t matter which song she was singing, she was always on pitch and she lead the way vocally. She is also a gifted instrumentalist, playing guitar and piano throughout the concert. Eugster was a highlight for me.

Scott Richardson was another favourite of mine. His musical abilities are incredible, with tremendous skills playing multiple instruments. (I lost count at five different instruments, one of which I cannot even identify)! He seemed to be the musical glue that held this foursome together. A fantastic musician!

Robin Guy is a passionate performer with an obvious love for the stage. Also multi-talented, she sings and plays a variety of instruments, but it is her upbeat personality and peppy stage presence that the audience seemed to enjoy most, they really added to the overall performance.

Now, I cannot say that the show was perfect. There were some noticeable errors, most notably, when the musicians started, then stopped, playing ‘Alberta Bound’ three times before finding their correct key. However, they chalked it up to “preview night,” and the audience had a good laugh! It really shows the professionalism of an artist, when they can take small mishaps and errors in stride, and make it into a funny moment with the audience. There were a few vocal and timing issues as well, but overall, this group of musicians is exceptionally talented, and well-suited for the genre.

The set list was impressive. The show ran a little less than two hours in total, which included a short intermission. The audience was treated to many of Lightfoot’s classics, and many of his lesser-known songs as well. There were a few songs that even I hadn’t heard before, which was a pleasant surprise! A bonus: there are two songs in the program, and the audience is invited to sing along for the refrain of those songs. And the audience DID! The man seated in front of me had a fantastic voice! I loved this element of audience participation!

I would highly recommend “Songs of Lightfoot” to anyone who loves Gordon Lightfoot, but also to anyone who enjoys folk music and is looking for an enjoyable, relaxing night out.

Lightfoot in Song is running from October 24th until November 2nd with matinees on October 27th and November 2nd, and a special performance at 11:30am on October 30th. Tickets are still available online, or at the Gladstone Theatre box office.
MEDIA: RADIO & TV
Chris White (CKCU) interviews Scott Richardson and Robin Guy (at about 27:10.
Barb Gray (CKCU) interviews Eleanor Crowder at about 1:04:37.
Sandra Abma (CBC-TV) shares a clip on The Weekend List.
THE TEAM 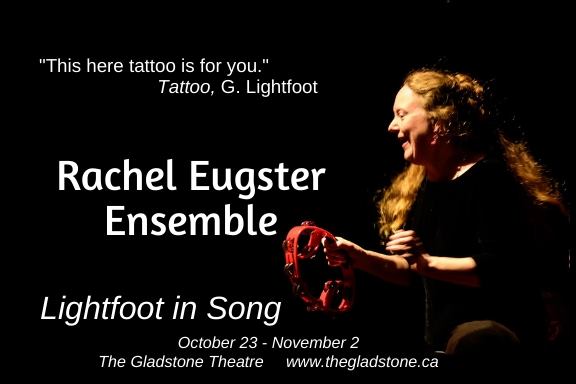 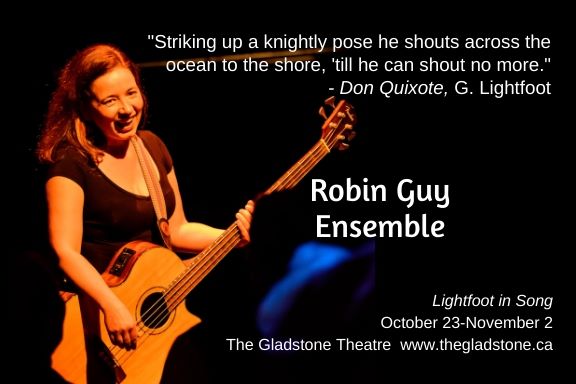 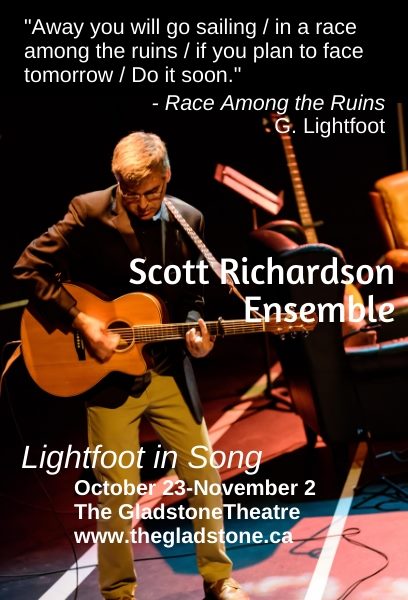 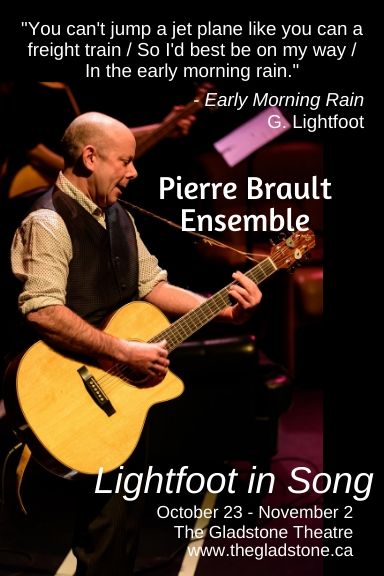 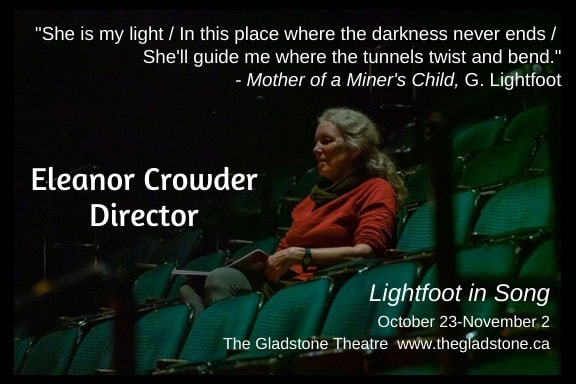