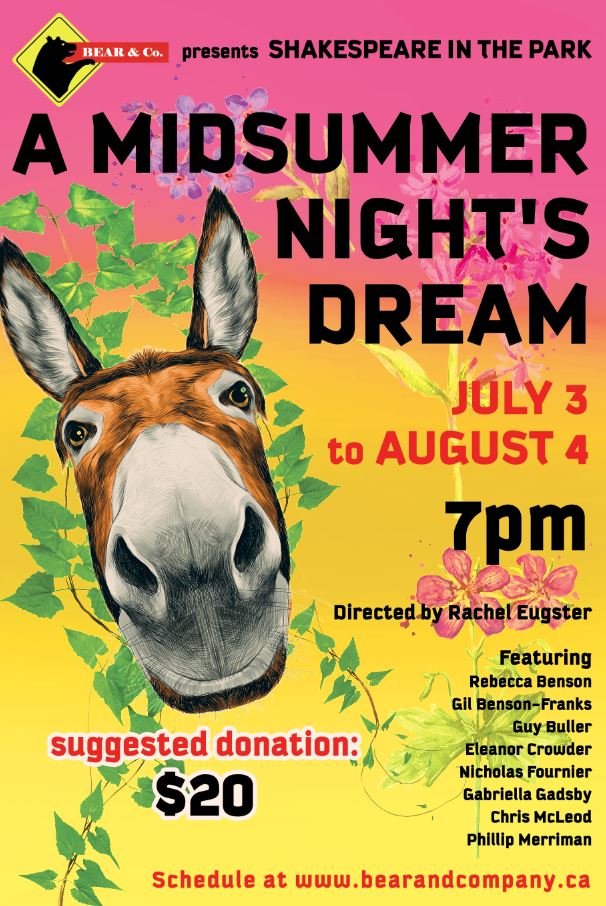 BE SURE TO DOUBLE-CHECK LOCATION THE DAY OF THE SHOW, IN CASE IT HAS CHANGED.
All shows begin at 7. Bring the family, a picnic, something to sit on, bug spray--and rain gear, if it
mizzles. (The show will go on, unless conditions turn unsafe. If it's too wet to sit on the ground, it's too wet for swordplay to be safe.) Suggested donation: $20 per person.
MEDIA
Hear Eleanor Crowder (Titania, Peter Quince) interviewed on CKCU's Friday Special Blend by Barb Gray and Chris White, beginning at about 50:00.
The CBC's Sandra Abma added Bear's A MIDSUMMER NIGHT'S DREAM to the Weekend To-Do List.
Review from Apt 613 by Samara Caplan and Laura Gauthier
If you read our review of Romeo + Juliet, then you might know that this was the summer we finally got around to making it out to some of Ottawa’s various parks to see some great productions. (We fully regret how long it took us to finally do this!). And what we’ve come to learn is that Shakespeare in the park might be our new favourite thing. What better way to enjoy a summer evening in Ottawa than theatre outdoors in a beautiful park (and with your own snacks!)? When we found out there was another Shakespeare production being put on in the city’s parks, we knew we just had to go!

Bear & Co’s A Midsummer Night’s Dream features a lively cast, very simple staging and costumes, and yet easily captured the audiences’ attention and imagination. They bring one of Shakespeare’s most well-known comedies to life and had the audience laughing and clapping throughout the evening.

A Midsummer Night’s Dream tells the tale of four young Athenian lovers, and a merry band of six local actors, who are all manipulated by fairies in the forest where most of the story takes place—but magic isn’t always foolproof.
The small-yet-mighty cast made great use of the park space and even included audience members in one scene (if you’re keen, show up a tad early to get your instructions!). There are a few small, but well-done, fight scenes which are clearly informed by actor and fight director Chris McLeod’s experience.
Actors Nick Wade and Phillip Merriman, when they played Lysander and Demetrius, had the audience in stitches in some scenes, but the entire cast shone and played their multiple roles with ease.

Just as we said with Romeo + Juliet, seeing Shakespeare performed live is the way to go. Bring your teens who are maybe not loving having to read it in high school so that they can see it and understand it as it’s meant to be – acted with emotion, body language, winks and nods to the audience and so much visual acting that helps explain the story, the infamous double-entendres, and the quirks of the language. Even if Shakespeare isn’t entirely your thing, seeing it live helps you understand more of the story and text than you might if you were just reading it.
Those who are more keen on Shakespeare will enjoy the subtext and meanings to be drawn by this production, as Director Rachel Eugster states in her note, “…let us be reminded to cherish the things Shakespeare cherished: each other, love, laughter, and this beautiful world.” 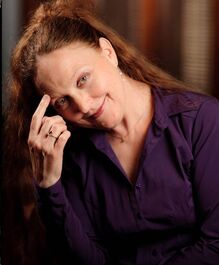 RACHEL EUGSTER (Director) is a founding member of Bear. While she has been involved in all 20 of the shows the company has produced since launching in 2012, this is the first time she has sat in Bear's director's seat. It is her great delight to settle into this role with the Shakespeare-in-the-Park tour of A Midsummer Night's Dream and this incredibly spirited and inventive cast.
Rachel has directed music for Bear, Salamander Shakespeare Co., Gladstone Productions, and the GNAG Theatre Program. She conducts the SJCC Ottawa Jewish Chorus, and previously served as an interim conductor for Ottawa’s Chinese Community Choir.
As an actor, Rachel was seen most recently at The Gladstone in Bear’s This Flight Tonight: Songs of Joni Mitchell, in Three Sisters’ Miss Shakespeare, and before that in Bear’s No Way to Say Goodbye: Songs of Leonard Cohen. This fall, she will appear at the Gladstone in Bear's up-coming tribute to another iconic Canadian singer-songwriter: Gordon Lightfoot.
Other Bear highlights include Martha in Virginia Woolf, Amanda in The Glass Menagerie. Banquo and Lady MacDuff (and music director) in Macbeth and, produced by Spidersilk Productions, Æmilia Lanyer in her own original play Whose Æmilia?, whose central character might have been Shakespeare’s Dark Lady of the Sonnets—or not.
Rachel is also the author of the award-winning picture book The Pocket Mommy (Tundra/Penguin Random House).​ 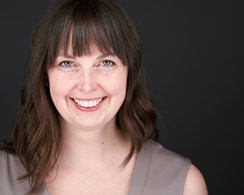 REBECCA BENSON (Hippolita, Helena) has worked as an actor and director in Canada and the U.K. with Three Sisters Theatre, Theatre Kingston, Soulpepper, Actors Repertory Company, The Ramshorn Theatre, and TACTICS--and with Bear & Co. in last summer's production of Cymbeline. Rebecca originally came to Ottawa in 2006 to pursue her MFA in directing at the University of Ottawa and, after many adventures that took her to Scotland, Winnipeg, and Kingston, she returned to the Capital in 2016 with her young family and happily settled in Little Italy / Hintonburg.
Actor credits include Olympe De Gouges in The Revolutionists and Ana in The Clean House (Three Sisters) (Prix Rideau Nomination), Milena in Family Stories Belgrade (ARC), Pimple in She Stoops to Conquer (Soulpepper), and Dot in Sunday in the Park with George (GBC/Equity Showcase). Rebecca teaches part-time at the Ottawa Acting Company, Ottawa School of Theatre, and Carleton University. She is also the director and facilitator for Branch Out Theatre's Creative Well Project and a member of the From the Roots Collective. 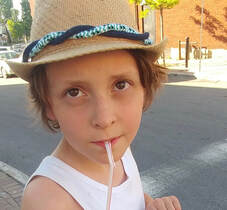 GILBERT BENSON-FRANKS (Snug the Joiner, Puck) joins the Midsummer cast in his professional debut. Gilbert has been studying theatre for the last three years, and made his community theatre debut in April in GNAG Theatre's production of The Wind in the Willows. He also played the title role in Peter Pan in his Page to Stage class at Ottawa Children's Theatre.
Gilbert would like to pursue a life of acting. He also enjoys reading, writing, and rock music, hanging out with his friends, and playing with his dog Archie.
Gilbert would like to thank all those who helped him get here, in cluding his family, Eleanor Crowder (who was the person who said, "Hey, would you like to be in this play?"), his friends for being supportive, and his teacher Nick Miller who helped him realize that he would like to pursue a career in theatre. 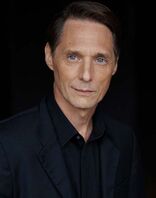 GUY BULLER (Egeus, Oberon) is delighted to be playing with a wonderful and talented cast of A Midsummer’s Night’s Dream. His last performance was as Charles in the well-attended show Clean House (Three Sisters). For Shakespeare, Guy has played Hortensio in The Taming of The Shrew (Bear and Co.), Iago in Othello (Salamander Shakespeare) and, while in the Yukon Territor,y Macduff in Macbeth.
Other roles include The Man in The Walk (Moon Dog Productions), The Invisible Man (Tara Players) and Running on Frozen Air (Nakai). Of his several film and television credits the roles of Joans Grotke in Designated Survivor and William Weaver in Crook are his favorites.
Guy has three feature length scripts in various stages of development and is working on his first novel that he hopes to get to print later this year.
Thanks to Rachel for your diligence in scheduling is amazing and your support so generous. Also to Eleanor for being a Shakespearian Polaris in an ever-increasingly rapid world. 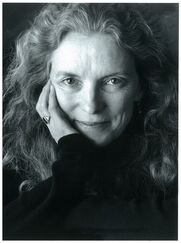 ELEANOR CROWDER (Quince, Titania) Eleanor Crowder is delighted to play with this stellar cast. Ottawa audiences know her Mother Courage (Third Wall), her Kate in Peter Hinton's legendary Shrew (tents and candles), and her work with Bear’s summer Shakespeare projects as actor and director.
She recently appeared at The Gladstone as Gloucester in King Lear, and directed the delicious comedy by Jessica Swales, Nell Gwynn,  for Three Sisters Theatre. Audiences across the country relished her cranky tough-love role in her own Momma’s Boy. Last summer, she toured Vern Thiessen’s Shakespeare’s Will across Newfoundland. She is excited to share that solo show with you at The Gladstone in 2020. 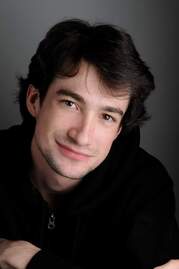 NICK WADE (Lysander, Flute) is ecstatic to be making his return to the stage with the wonderful Bear & Co. team. Since his last outdoor show, Arms and the Man with Odyssey Theatre, Nick has been working in the fields of theatre lighting, arbory, and as an auto mechanic.
Other works include the award-winning multimedia show The Sink, and working with Theatre 4.669 on a creation grant for Young Bucks.
Many thanks to his family and friends. Enjoy our fun faerie forest adventure. 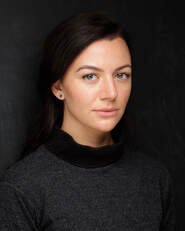 GABRIELLA GADSBY (Hermia, Snout the Tinker) Gabriella, of British-Brazilian descent, moved to Ottawa in late 2017 from the U.K. There she studied physical theatre at East 15 Acting School, and has since worked as a deviser and performer.
Gabriella’s Canadian debut was Plosive Productions’ show Blink, in which she played Sophie at the Gladstone Theatre. This show helped earn her a nomination for the 2018 Prix Rideau Awards Outstanding Emerging Artist award. Last Christmas, she performed with 9th Hour Theatre Company in The Lion, the Witch, and the Wardrobe as the villainous Dwarf, and this past spring she played Cordelia in Bear's production of King Lear. 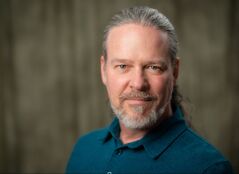 CHRIS MCLEOD (Theseus, Bottom the Weaver, Fight Director) Chris McLeod made his professional acting debut with Odyssey Theatre in 1988. Since then he received an Honours Degree in Directing from the University of Ottawa and a Masters in Stage Directing from the University of British Columbia. He lived in Germany and returned to Ottawa to became Director in Residence with a Company of Fools in 1998. He was Artistic Director of Salamander Theatre for Young Audiences from 2000 to 2012. In January 2011 Chris became a founding partner of National Stage Combat Training Partners. He returned to adult acting as Comte De Guiche in Plosive Production's Cyrano de Bergerac in 2012 and has played Prospero and Macbeth in Bear & Co.'s summer touring productions of The Tempest and Macbeth. Most recently he appeared in Plosive Production's It's a Wonderful Life as well as Albany at The Gladstone this past spring in Bear & Co.'s King Lear.  Chris would like to thank his family and friends for their Bottomless (see what he did there?!?) love and support. 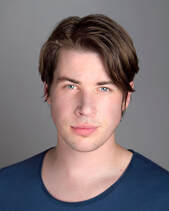 PHILLIP MERRIMAN (Demetrius, First Fairy) An Ottawa-based actor, Phillip was most recently seen as King Charles II in Three Sisters' production of Nell Gwynn, and before that as Edgar in Bear's King Lear. Previous credits include Dr. Frank N. Furter in The Rocky Horror Show with Ovation Productions; Iachimo, Cloten and Arviragus in Cymbeline (Bear & Co.); Max in Bent (TotoToo); Jack in Dead Accounts (Ottawa Little Theatre); and Romeo in Romeo and Juliet (Bear & Co.)
Phil would like to thank everyone at Bear & Co. for this wonderful opportunity--and of course, a huge thank you to his family for their endless love and unwavering support.