Shakespeare in the Park: Cymbeline toured parks in and around Ottawa, summer 2018. 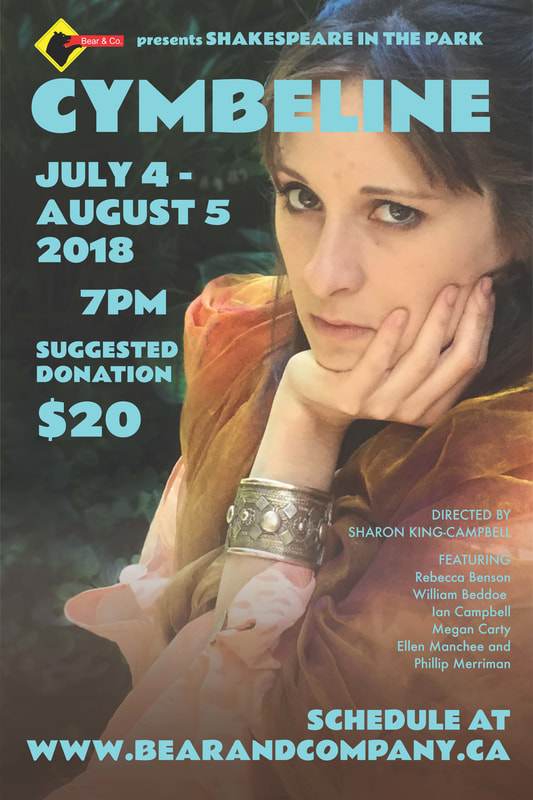 BE SURE TO DOUBLE-CHECK LOCATION THE DAY OF THE SHOW, IN CASE IT HAS CHANGED.
All shows begin at 7. Bring the family, a picnic, something to sit on, bug spray--and rain gear, if it
mizzles. (The show will go on, unless conditions turn unsafe.) Suggested donation: $20 per person.
MEDIA
CLICK HERE TO WATCH ACTOR MEGAN CARTY AND PRODUCER ELEANOR CROWDER ON CTV-TV OTTAWA LIVE!
CLICK HERE TO HEAR ACTOR WILLIAM BEDDOE AND PRODUCER ELEANOR CROWDER ON CKCU-FM (RARE BLEND)
REVIEWS
Bear & Company’s Cymbeline in the park is an hilarious, fully enjoyable show for a nice summer night
Reviewed by Ryan Pepper
for Capital Critics Circle

While Shakespeare’s company probably never performed his plays in a park, Jacobean theatres were open-air, lit only by sunlight, and had no fancy lighting, sound, and set designs like modern theatre. Bear and Company’s performance of Cymbeline, one of Shakespeare’s later plays, does a lot to recreate that original Jacobean feel by staging an open-air show in various parks across the city. .

Cymbeline is one of Shakespeare’s crazier plays, with a convoluted plot that’s hard to follow, and hard to believe could ever happen in real life. The plot is a grab-bag of earlier Shakespeare tropes. Kooky king a la King Lear? Check. Star-crossed lovers? Of course. Running off into the forest disguised as a boy? Yep. A conniving queen? Uh-huh. A lecherous womanizer? Certainly. The Roman army invades and are defeated a scene later. The plot is so absurd, in fact, that Cymbeline fell out of favour for centuries, and many critics still think that Shakespeare had just gotten bored. It is one of his final plays, after all.
But the silliness of the plot lends itself well to Bear and Co., a troupe who seem perfectly tailored to staging funny Renaissance plays. The play only had six actors, with the main characters, Imogen and her lower-class lover Posthumous Leonatus, played by one actor each, and the other four actors covering as many as six characters each. The doubling adds to the confusion at first, but also to the comedy; so too does the pared-down set. This isn’t supposed to be a serious play, and performing it with minimal props in a park puts some limitations on the play that add to the hilarity. For instance, when a headless corpse is required—yes, a lot goes on in this play—they use a dummy made from a pillow with pool noodles for legs. It’s crude, sure, but hilarious, and suits the silliness of the play. The same goes for the giant teddy bear that represents the kill the hunters make. The hunter Arviragus is almost caveman-like, with shaggy hair, a gruff and boastful attitude, and a fur vest, but it’s impossible not to laugh as he carries an oversized teddy bear on his shoulder like a freshly killed deer.
Cymbeline is already a flurry of characters, but Bear and Co. make it work, with actors often getting off-stage just to turn back around as a completely different character. The scene changes are rapid too, with no pauses in between. Sometimes the characters from the previous scene aren’t even off the stage yet when the next scene starts. It’s a whirlwind, but it adds to the non-serious nature of the play. Shakespeare couldn’t have written a plot like this one and been serious about it, and the speedy scene and character changes make it even more comedic. At a few points, stage-hands must be present just to help switch scenes, and instead of staying quiet, they wave their arms around and hush us as if to distract the crowd from what they’re doing. You wouldn’t see it in serious drama, but it makes this Cymbeline in the park even more enjoyable.
The acting was good, delivered at a fine volume (there were no mics) and with surprisingly few flubs, given that actors were memorizing far more lines than just one character. The comedy between the lines was also spot-on, with Cloten and Iochimo’s sexual bravado shown off particularly well. The only shortcomings in the acting were in the more serious scenes. While the comedy was done well, the dramatic bits could have been stronger.
Having seen the park version, I can’t even imagine seeing Cymbeline presented on an actual stage. The pared-down, outdoors setting suits it well, and the character doubling—or quadrupling—and simple props help make the show the farce Shakespeare surely intended it to be. 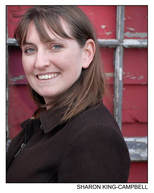 DIRECTOR SHARON KING-CAMPBELL grew up in Alta Vista, and is now based in St. John's, Newfoundland, where she works as a director, actor, playwright, and storyteller. Most recently, she has directed transVersing (Artistic Fraud of Newfoundland/FTLOL), Shake It Up (Shakespeare by the Sea), Woman, Naked (Girl Power), Sexy Laundry (New Curtain Theatre), and The Good Body (Nothing On Productions). She is also assistant director for Artistic Fraud's newest piece, Between Breaths, which premieres this summer. Recent acting credits include Women Playing Hamlet (PerSIStence), Brazil Square (Girl Power), and Richard III (Shakespeare by the Sea).
Sharon was the 2017 recipient of the Rhonda Payne Award, which provides financial assistance to women working as actors or writers in Newfoundland & Labrador theatre. She holds a BFA in Theatre (Acting) from Memorial University of Newfoundland and is currently pursuing a masters degree in English at the same institution. She is grateful to Bear & Co. for bringing her home to play, and to her husband Mike for his unwavering support.

WILLIAM BEDDOE (Cymbeline, 2nd Lord, Philario, Captain, 1st Captain) is an Ottawa-based actor who is getting quite the classical workout this year, having recently performed in #faustus (an adaptation of Marlowe’s Dr. Faustus) at the Ottawa Fringe, and Theatre Kraken’s Othello at The Gladstone. He is delighted to be playing in the open air this summer, having performed “al fresco” with Odyssey Theatre (The Things We Do for Love, The Illusion, False Confessions) and the St. Lawrence Shakespeare Festival (The Comedy of Errors). William has performed with many local companies, including Evolution Theatre (The HOME Show, Playing Bare, Insomnia), Black Sheep Theatre (Novel House), Third Wall (The Misanthrope, Murder in the Cathedral, and others), and Abalone Productions (A Little Fire), as well as appearing regularly at the Fringe (How to be a Gentleman, Immolation, Emissions: A Climate Comedy and Bear & Co.’s Windfall Jelly).
William studied theatre at Brock University and performed in and around Toronto for several years, where he also had the opportunity to study with leading theatre artists, including R.H. Thomson, Peter Hinton, and Patsy Rodenberg. He is married with twin daughters, and lives in New Edinburgh. 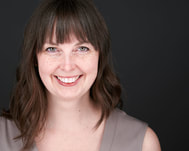 REBECCA BENSON (Queen, 1st Lord, Belarius, Soothsayer, 2nd Captain, Jupiter) has worked as an actor and director in Canada and the U.K. with Three Sisters Theatre, Theatre Kingston, Soulpepper, Actors Repertory Company, The Ramshorn Theatre, and TACTICS. She has been an assistant director at the NAC, Soulpepper and the Stratford Festival. Rebecca originally came to Ottawa in 2006 to pursue her MFA in directing at the University of Ottawa and, after many adventures that took her to Scotland, Winnipeg, and Kingston, she returned to the Capital in 2016 with her young family and happily settled in Little Italy.
Actor credits include Ana in The Clean House (Three Sisters), Milena in Family Stories Belgrade (ARC), Pimple in She Stoops to Conquer (Soulpepper), Dot in Sunday in the Park with George (GBC/Equity Showcase). She also co-created and performed Anybody Can Be Pussy Riot for Kingston’s inaugural StoreFront Festival, and recently was dramaturg/director for the new play Heartlines by Sarah Waisvisz (TACTICS). Rebecca was co-director with Toronto’s ConvergenceTheatre on the creation of two original site-specific productions: Autoshow and The Gladstone Variations (Dora Nomination for Best Direction, 2008). She teaches part-time at the University of Ottawa’s Theatre Department and Carleton University.

IAN CAMPBELL (Posthumous Leonaturs) is a theatre artist and educator based in St. John’s, Newfoundland, who is delighted to visit his hometown of Ottawa for this production. From 2015 to 2018 he served as Artistic Director of the Shakespeare by the Sea Festival in St. John’s, where he directed productions of A Comedy of Errors, Richard III, Timon of Athens, and the one-man show Shylock. Past acting highlights include Bottom in A Midsummer Night’s Dream (Funeral Pyre Theatre), Bill in Perfect Wedding (Joint Productions), and Duncan in Pirate Play (Out of a Box Kids Theatre).
Ian’s adaptations of Richard III and Henry V for children are published as part of the Playing with Plays series. He holds a Bachelor of Fine Arts degree from York University an Education degree from the University of Western Ontario, and has trained at Shakespeare & Company in Lenox, Massachusetts. 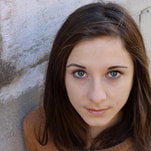 MEGAN CARTY (Imogen) is overjoyed to be appearing in her first Bear & Co. production this summer as Imogen! She was most recently seen in Lungs at the Ottawa Fringe, which took home the award for Best Ensemble Performance. This past spring, Megan also appeared as Baby Bridget in Up to Low on the National Arts Centre English Theatre mainstage. Megan is the founder of the multi–award-winning local company Cart Before the Horse, whose mandate is to use theatre as an outlet to explore topics we are otherwise afraid to talk about. Other recent performing credits include: girls!girls!girls!, Perfect Pie, The Shape of a Girl (Cart Before the Horse Theatre), The Book of Everything (Magnus Theatre), Violet’s The Pilot (Thousand Islands Playhouse), In the Room, Stubborn Stone (Cellar Door Project), A Summer…A Fair, Bridge to the Past (Theatre Wakefield), and Burn (Avalon Studio). 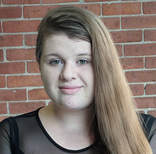 CAROLINE FROST (Stage Manager) is thrilled to be working with Bear & Co. on this summer's tour. She recently graduated from the theatre program at Canterbury High School, where she had the chance to produce and stage manage some of their most recent mainstage productions. She also worked last summer with Odyssey Theatre as a stage management apprentice. Caroline looks forward to learning more about theatre over the next year and through her post-secondary studies. She could not be more excited to start her professional career with such an amazing group of people. 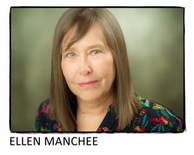 ELLEN MANCHEE (2nd Gentleman, Pisanio, Cornelius, Musician/Messenger, Caius Lucius, Guiderius) first became addicted to acting when she was 11. Since then, she has appeared continuously in community and semi-professional theatre, while holding down a succession of day jobs, including legal secretary, archivist, historian, and bookseller. Theatre remains her passion and Shakespeare one of her favorite writers to play with.
Ellen trained with a number of Canadian teachers and actors, including Tom Diamond, Brenda Kamino, Sue Miner, R.H. Thomson, Duncan McIntosh, Marvin Hintz and David Rotenberg.  She also spent a month at the London School of Music and Dramatic Arts in London studying Shakespeare. She has worked with companies in Ottawa, Cornwall, and Yellowknife, including Ninth Hour, Ottawa Little Theatre, NW9 Theatre Collective, Hintonburg Chamber Theatre, Vintage Stock, Tara Players, Vagabond Theatre, and Toto Too.
Favourite theatre credits: The Screwtape Letters and The Great Divorce with Ninth Hour; Molly’s Veil with Goya; Die Zombie Die, an Ottawa Fringe production; The Gin Game with Trapdoor Theatre; and Lovers Meeting with Tara Players.

PHILLIP MERRIMAN (1st Gentleman, Cloten, Iachimo, Arvigarus, Gaoler) is extremely excited to have the opportunity to be performing with such a talented group of artists and to be returning with the Bear & Co. team bringing Cymbeline to life this summer to the parks!
Past credits include Jack (Dead Accounts, Best Production Theatre Ontario), Max (Bent), Romeo (Romeo and Juliet), Trip (Other Desert Cities), Melchior Gabor (Spring Awakening), and Christopher Wren (The Mouse Trap).
Phillip would like to thank his brilliant support group of friends and family, without whom he would be so very lost.